We circle round with Rose and Lynne dancing all the way,

We dance with grace and gusto when we hear the music play,

Slip step here - slip step there, we'll get it right one day,

Sway to right - sway to left as we dance the hours away.

Happy when we meet again, smiles seen all around,

With grapevines, nappy walks and stamps, are you sure we're here to dance?

A partner dance we have to do in a mysterious Grand Chain,

How many people have I passed? I've got it wrong again!

Some fifteen years ago, towards the end of a long illness, my therapist, Sylvia Hollingworth — now, sadly, no longer with us — invited me to try circle dance. Once I had begun to overcome the two-left feet syndrome, I was astonished by the spiritual impact. In fact, I had what I can only describe as a spiritual experience during the Vivaldi/Friendship dance — an overwhelming sensation of beauty.

Now, I am, to trade, an engineer/scientist — a down-to-earth "nuts and bolts" man — and my curiosity was fully aroused. Where on earth does this stuff come from? And, of course, other than very short term recent history, and mere speculation, no-one could tell me. . .

Francesca Stridgen and ‘A Flavour of Findhorn’

It was good to have Francesca back in Auchterarder after a gap of two years. ‘A Flavour of Findhorn’ had first been scheduled for August 2015 but due to an injury Francesca was unable to come that year. 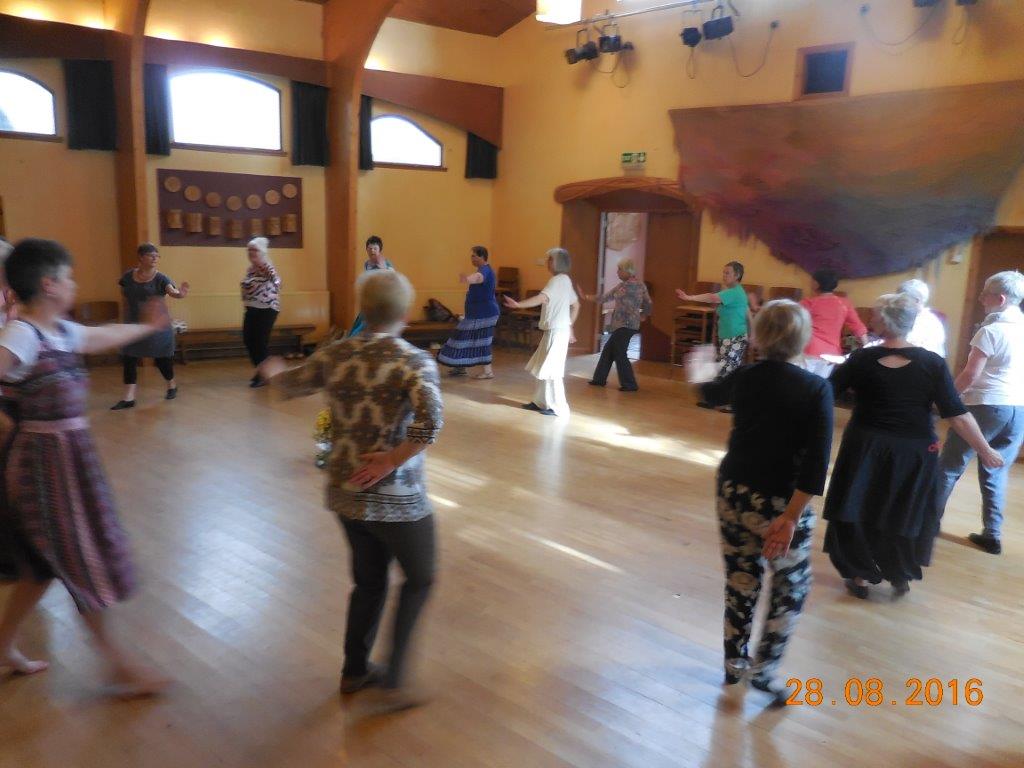 So it was after this year’s Festival of Sacred Dance, Music and Song, marking the 40th anniversary of Bernhard Wosien’s first visit to Findhorn, that we had our little taste of what happens there.

Francesca brought with her a photograph taken at the 2014 Festival that showed the resident dance teachers Laura Shannon, Peter Vallance and Susanne Anders Bartholomai along with that year’s guest Piry Krakow.

The guest teacher for 2016 was Nanni Kloke and Francesca aimed to give us at least one dance that would have been taught (or even choreographed by) each of these teachers. Eighteen dancers came for the session held in the afternoon of August 28th at Three Kings’ Hall, Ochil Tower School in Auchterarder. . .

A Labyrinth in Kinburn Park

There is a closely guarded secret in Kinburn Park, St Andrews. A beautiful Labyrinth, recently constructed by volunteers and completed about three months ago. 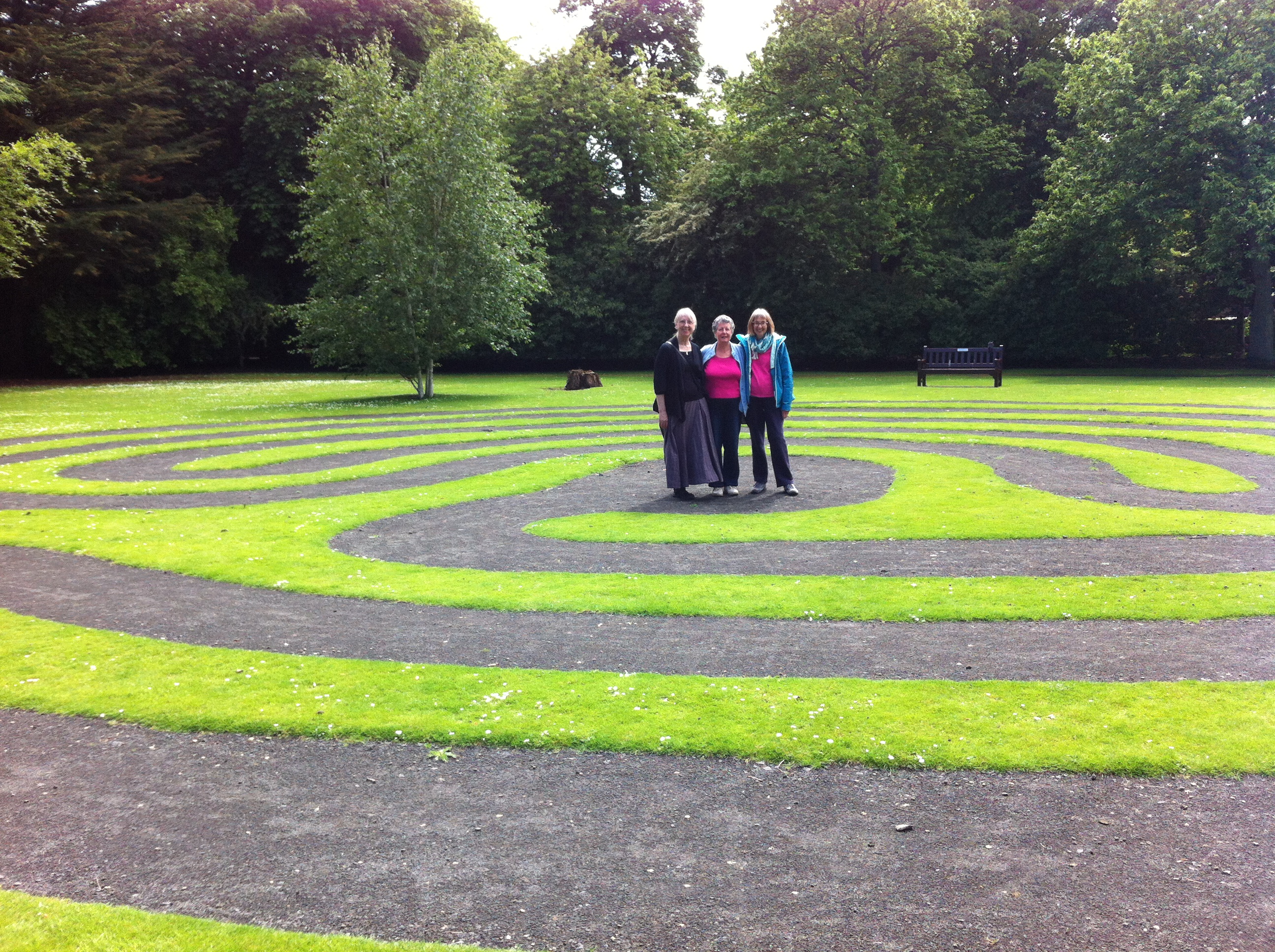 In recent years, there has been a resurgence of interest in the labyrinth, a place for personal meditation and possibly spiritual transformation. It can be used as a walking meditation, a way to finding your own spiritual centre, a body prayer.

There is no right or wrong way to walk or dance a labyrinth. It is a powerful tool to illuminating one's path through life. . . .

As a newcomer to Auchterarder, I was keen to meet people and find new interests. I had always been interested in dance and before moving to Auchterarder, had enjoyed many different types of dance class – my highlight was dancing with Wayne Sleep who was taking a tap dancing class! . . .

They investigated different types of exercise and compared their effectiveness: table tennis as against walking; dancing against going to the gym. It could just be that because she trained as a dancer, Angela Rippon, the presenter (aged 71), was a tad biased, but dancing came out as the best form of exercise. And of course I'm not biased at all when I say that circle dancing reaches those parts of the body, mind and spirit that other forms might not, and as well, it's sociable and fun and the music's wonderful!

So if you catch sight of yourself in the mirror looking older than you'd like, dust off your dancing shoes and come along. 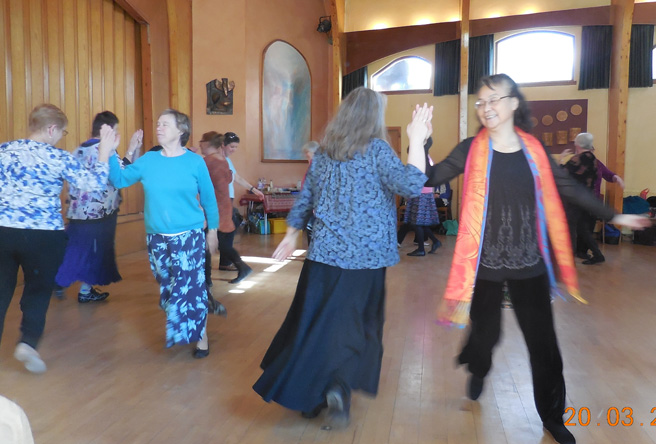 On Sunday March 20th, coinciding with the Spring Equinox, 23 dancers came together at Three Kings’ Hall, Auchterarder for a day of dance themed around the signs of the Zodiac.

This dance day was first ‘aired’ in 2008, inspired by the beautiful pictures in a calendar that I had purchased the previous year. 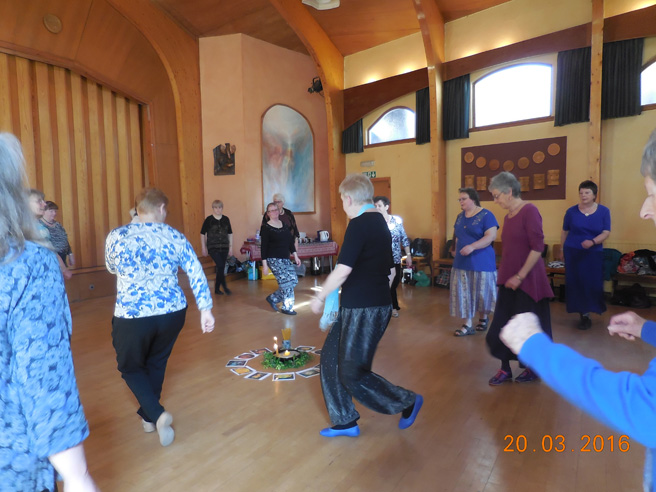 Not knowing very much at all about astrology I consulted a knowledgeable dancer who was then part of our group, read the book she lent me, and came up with a sequence of dances.

We started the morning in Aries and danced through the signs until Pisces, completing our journey with the Sun Meditation Dance. 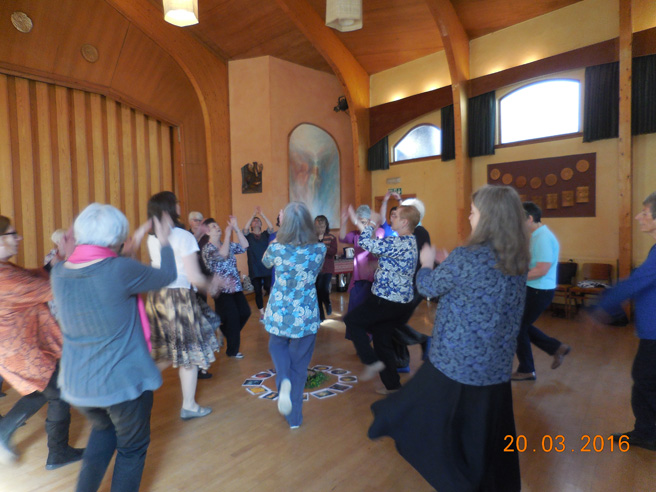 The pictures show us dancing a partner dance (with lots of opportunity for communication) for Gemini, as well as Kwaheri and Healing Fire Dance for Leo.

Apart from the urn deciding not to work, the day went really well and we raised £212 for Marie Curie.

This turned out to be a very special day for me, and an apt herald of the spring equinox. 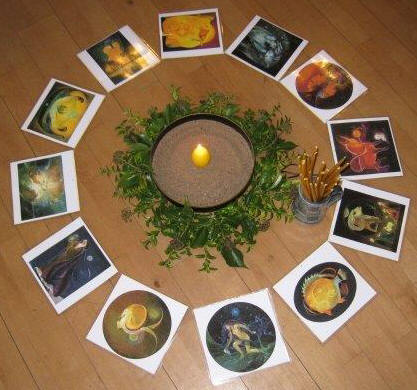 At the beginning, Keryn reminded us of the links between the cycle of nature and the cyclical nature of the zodiac. Thanks to her impressive and extensive preparations, we were given a summary of the characteristics of each zodiac symbol, from Aries to Pisces, and as we moved round the cycle, one by one candles were lit by the dancers born under that particular sign.

Lynne gave a hilarious address* to those aspiring to teach dance to participants from different astrological signs. . .

See all the photos from our Zodiac day

Back to top of page